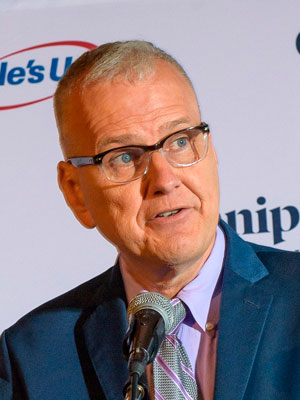 John W. Morgan, associate vice president for public relations, has been at Quinnipiac University, Hamden, Conn., since 1996. In his position, he is responsible for the university’s media relations, issues management and crisis communications. He also is a member of Quinnipiac’s Emergency Management Team.

Morgan has been a member of the executive committee of the Counselors to Higher Education, a section of the Public Relations Society of America, since 2013. He currently serves as chair of the section and has served as chair-elect and communications chair. He also has served on the committee that plans the section’s Forum.

Morgan holds a graduate degree in journalism from Quinnipiac University and a bachelor’s degree from Southern Connecticut State University, New Haven, Conn., where he was named the university’s outstanding journalism student in 1983. He and his wife, Susan, live in Woodbury, Conn. with their twins, Anson and Olivia. 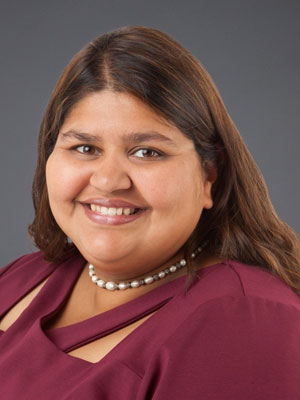 Sheena is passionate about equity, diversity, and inclusion in higher education spaces and beyond. She serves on the University of Utah’s MLK Week Organizing Committee and was the Morris Media & Society Lecture Keynote Speaker at Utah State University in 2019, addressing “Minoritized No More: Ending Marginalization in Marketing.”

Sheena joined the PRSA Counselors to Higher Education Executive Committee in 2019. She is serving as the chair-elect in 2021, and she hopes to serve as chair in 2022. Sheena previously served on her local Greater Salt Lake Chapter’s Board from 2016-2017.

Sheena is an avid traveler, having visited all 7 continents, and enjoys stargazing and spending time with her husband, James, and their Jack Russel terrier, Amber. Sheena is a rabid Real Salt Lake fan. 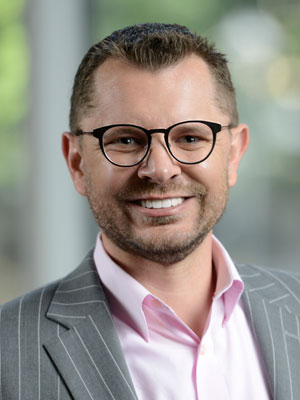 As CEO of RW Jones, Sean is our senior-most public relations counselor. During his nearly two-decade career, he has played an integral role in counseling clients and helping them to implement full-scale strategic communications programs and issues management initiatives. With a lifelong passion for education, Sean works closely with presidents and executive leaders to think strategically about their institutions and their role in both shaping institutional narratives and contributing to the public discourse in meaningful ways.

Prior to joining RW Jones, Sean led the crisis and media relations practice at one of Los Angeles’ largest and oldest PR and public affairs firms. In this role, he connected clients’ PR and political strategies in ways that supported their sometimes-disparate demands. 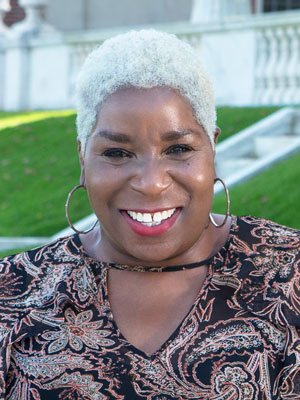 Renell Wynn has more than 15 years of substantial executive experience, driving the communications and marketing strategies of some of the most prestigious universities in the United States by helping research institutions advance the human condition through service, care, research, teaching and learning. Currently, she is vice president for Communications at Wesleyan University in Middletown, CT

Her passion for learning and service as a marketing executive has been extended to the support of community organizations that are dedicated to helping young people thrive. As a board member of many Boys and Girls Clubs, Girls Scouts of America, and Parent Teacher Association, Renell believes these groups builds young people’s character, confidence and positions them for successful lives.

Ms. Wynn received her master's degree in business administration from William Woods University and a bachelor's in English from Spelman College. She has one son who is living and thriving in the Washington, DC 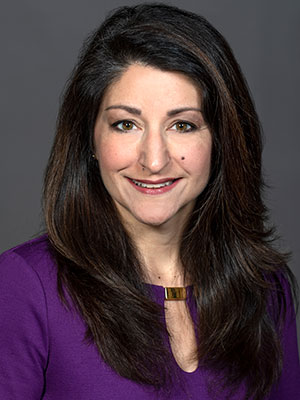 April Kaull is the Executive Director of Communications for University Relations and Enrollment Management, overseeing the day-to-day operations of the unit, which is charged with telling West Virginia University’s story.

Kaull joined WVU in January 2015 after spending more than 20 years as a broadcast journalist in West Virginia.

A two-time graduate from WVU, Kaull received her bachelor’s degree in broadcast news in 1995 and her master’s degree in Integrated Marketing Communication in 2016. She also serves as an adjunct faculty member at the WVU Reed College of Media.

Kaull is an active member of PRSA Counselors to Higher Education (CHE). As the Programming Committee Co-Chair, she works to develop and present programming focused on the most pressing challenges facing higher education.

A native West Virginian, Kaull grew up in Harrison County and now calls Morgantown home with her husband where they enjoy exploring the natural wonders of the Mountain State and cheering on the Mountaineers in all sports.

Connect with Kaull via email at akaull@mail.wvu.edu, via Linkedin or Twitter. 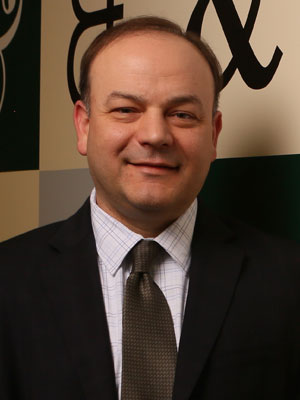 Whitson has been a part of the executive committee for PRSA’s Counselor’s to Higher Education since 2018 and currently serves as chair of the recruitment committee. He received his B.S. in Mass Communications from Virginia Commonwealth University where he completed the News Editorial track within Mass Communications. Before coming to W&M in 2003, Whitson worked as a daily newspaper reporter. His last journalism position was covering higher education for the Daily Press in Newport News. 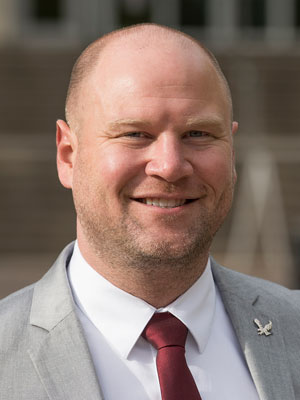 Lance Kissler is the Associate Vice President of University Relations at Eastern Washington University, overseeing marketing, communications, and alumni relations for the university. Lance brings more than 15 years of experience to this role, including prior experience at STCU and Pacific University. He earned his Masters of Science in Communications and BA in Graphic Communications from Eastern in 2010 and 2004, respectively. He also teaches classes on social media, digital marketing and PR at both EWU and Whitworth University as an adjunct instructor.

As a member of PRSA since 2005, his commitment to the public relations profession includes serving on the Counselors to Higher Education section executive committee, as well as former officer roles with the Greater Spokane PRSA and Portland chapters.

Lance currently serves as the Chair of the City of Spokane Human Rights Commission. He formerly served on the boards of INBA (the regional LGBTQ+ and ally chamber of commerce), CASE District VIII, and Leadership Spokane, as well as gubernatorial appointments on the Governor’s Advisory Council on HIV/AIDS and the Washington State Higher Education Coordinating Board. He graduated with the Leadership Spokane Class of 2014 and has volunteered with the End the Violence campaign (a collaboration of domestic violence service organizations in the Spokane area), the Red Cross, SNAP, Spokane AIDS Network, and the Spokane Humane Society, amongst others. In 2012, EWU honored him with the inaugural Inspirational Young Alumnus Award, and in 2016 he received the Spirit of the Red Cross award for his service to the community. 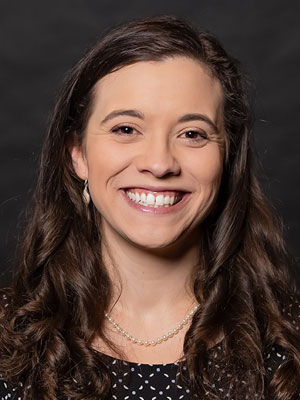 A native of Uruguay, Andrea is the Marketing Director for JacobsEye Marketing Agency, where she oversees the portfolio of marketing programs, development and execution of insight and analytics-driven strategies, integrated marketing, and lead generation campaigns. She’s responsible for the agency’s client portfolio account management as well as IT, event/experiential, marketing and media teams. She supports the agency in business development pitching to government agencies such as JE’s newest client, the State of Georgia, and its various agencies and departments.

A champion for DEI, Andrea is passionate about international education, multiculturalism, diversity of thought, equity and inclusion. Andrea currently serves as the Immediate Past Chair of PRSA’s Diversity & Inclusion National Committee and Diversity Chair for the PRSA Counselors to Higher Education Executive Committee.

In her role as National D&I co-chair, she was responsible for developing and implementing PRSA’s first-ever three-year strategic plan, and launching PRSA’s new series Diverse Dialogues that has brought together D&I leaders and experts to share insights and best practices, guiding 4,000+ communications professionals in having critical conversations that enable real change. 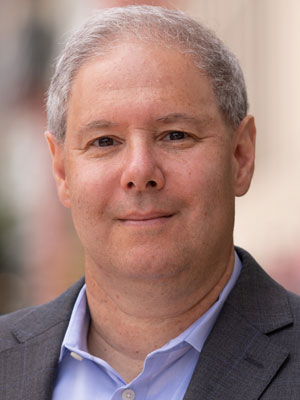 Jonathan Riskind oversees ACE’s Office of Public Affairs, which works to maintain the Council’s presence as a top source for media on higher education issues and policy, enhance public understanding of a wide range of higher education topics, advocate on behalf of ACE membership on key issues, and promote the important work of ACE programs. He works closely with ACE’s Office of Government Relations to help communicate the Council’s public policy positions to policymakers and the media, and works with divisions across the Council to increase visibility and awareness of ACE programs and initiatives.

Riskind arrived at ACE in April 2012 after a career in journalism. He was a longtime reporter and Washington Bureau Chief for The Columbus (Ohio) Dispatch, where he covered Congress, the White House, federal agencies and state and national political campaigns, and was the recipient of numerous journalism awards. Prior to joining the Council, he served as Washington Bureau Chief for a group of papers in Maine, including the Portland Press Herald.

He holds a bachelor’s degree from Macalester College (MN), and is a native of Chicago. 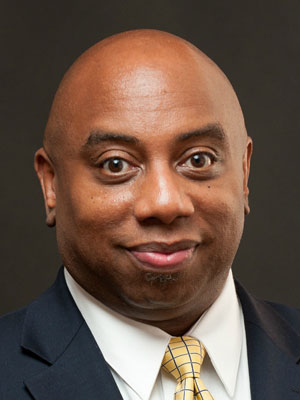 Dana Fair has provided over 30 years of strategic communications leadership in the public and private sectors with experience in global and domestic matters. He holds a B.A. in English from the University of Michigan and a M.A. in higher education administration from Eastern Michigan University.

He has been recognized by the Council for Advancement and Support of Education with a Circle of Excellence bronze medal and the Association of College and University Housing Officers International with an award for communications planning. At the Voronezh Institute of High Technologies in Russia, he received an International Program of Academic Exchanges certificate for his presentations to leadership on the importance of diversity and co-curricular education in academia.

An accredited (APR) member of the Public Relations Society of America, Dana has served on CHE’s executive committee for nearly seven years – returning in 2021 to collaborate with the multi-university team of executive leaders and to assist in delivering on the section’s mission and goals.