This year’s Bateman Case Study Competition challenged students to develop and present a comprehensive public relations campaign to increase awareness of the problems surrounding childhood cancer treatment in the U.S. on behalf of With Purpose, a youth-led movement dedicated to ensuring kids with cancer have better treatment options.

The campaign focused on the following issues: only 4% of the National Cancer Institute's budget is allocated to pediatric cancer research; only four pediatric cancer treatments have been FDA approved in the last 30 years; and 1 in 5 children diagnosed with cancer will not survive.

Eighty-four teams from across the country developed strategies to educate the next generation of childhood cancer advocates. Each team was judged on their research, creation, implementation and evaluation. The top three finalist teams were invited to Charleston, S.C. to present to representatives from With Purpose and PRSA.

LSU’s Fight for Five campaign was a fight for improvement; a fight for the fifth percentile, the fifth treatment option, and the fifth child. Their campaign reached over 45,000 people via social media and nearly two million people through earned media. Additionally, the teams established a With Purpose chapter at LSU.

“I knew the Bateman Competition would help to prepare me for a career in public relations, but I never imagined that I would grow to love the cause so dearly,” said Josie Bonnette, the LSU Media Relations Director. “

The KSU team campaign raised awareness of the childhood cancer research funding inequity and succeeded in encouraging college and high school STEM students to advocate for With Purpose to narrow the pre-clinical research gap. While the CSULB Live With Purpose campaign educated one million people about the reality of childhood cancer and harnessed the growing power of youth activism.

“All three teams presented comprehensive, well-researched and impactful campaigns. Selecting a winner proved incredibly difficult and we plan to incorporate elements from each team's efforts in national efforts,” said With Purpose Executive Director Erin Benson. “In the end, the cohesive narrative driving the Louisiana State University team's campaign and their ability to spread With Purpose's mission to a wide audience spanning multiple states in a short period of time made their team stand out.”

The Bateman Case Study Competition originated in 1973 as a National Case Study, allowing PRSSA members to exercise the analytical skills required for public relations problem solving. In 1983, the name of the Competition was changed to honor the late J. Carroll Bateman, APR. Bateman was a past president of the Public Relations Society of America (PRSA) and was instrumental in the founding of PRSSA. The Competition has partnered with organizations such as Home Matters, Fiserv, United Way Worldwide, Ally Financial, U.S. Census Bureau and more.

About With Purpose
With Purpose is a nonprofit organization dedicated to making sure kids with cancer have access to safe, effective treatment options by empowering youth and community leaders to take action. Childhood cancer is currently the leading cause of death from disease among children in the U.S. For many pediatric cancers, there has been little to no advancement for treatment since the 1970s, which is one of the reasons why one in five kids diagnosed with cancer in the U.S. today will not survive. Even current life-saving treatments often result in long-term, costly medical issues for children who do survive. At With Purpose, we know with the right resources and energy, we can do better. We invest in the power of young people to change the world, and believe it will be the next generation of leaders that will change the story for childhood cancer treatment in the U.S. 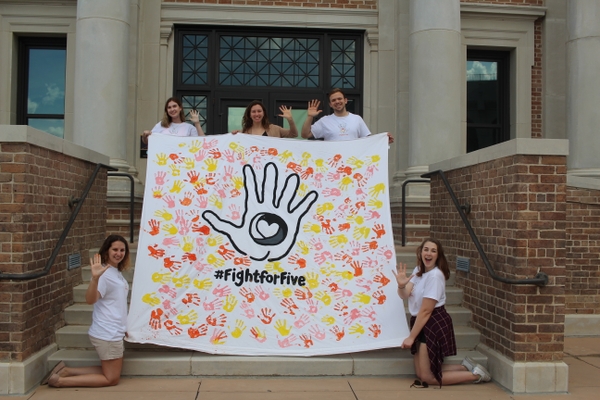