NEW YORK, May 13, 2021 – PRSSA, the foremost organization for students interested in the public relations and communications fields, announced today that California State University, Long Beach was named the winner of the 2021 Bateman Case Study Competition. Taking second place in the competition was the University of Nebraska–Lincoln followed by Loyola University New Orleans in third place.

This year’s Bateman Case Study Competition challenged students to research, plan, implement and evaluate a public relations campaign focused on reversing the corrosion of civility in American life and fostering more constructive and inclusive public discourse in all corners of society.

“Year in and year out, I continue to be impressed with the campaigns students across the country create for the Bateman Case Study Competition,” said Jeneen Garcia, Senior Vice President, Programming, PRSA. “I commend these teams for the important work they did and continue to do to emphasize the significance of civility in their communities. They are shining examples of what is possible when we listen, learn and work together.”

The Bateman Case Study Competition originated in 1973 as a national case study allowing PRSSA members to exercise the analytical skills required for public relations problem solving. In 1983, the name of the Competition was changed to honor the memory of the late J. Carroll Bateman, APR. Bateman was a past president of PRSA and was instrumental in the founding of PRSSA.

PRSSA received 54 entries from colleges and universities across the nation. Due to the COVID-19 pandemic, the top three finalists presented their campaigns virtually to a panel of judges comprised of representatives from PRSA.

California State University, Long Beach’s month-long online campaign was developed and implemented by five students. The campaign's overall goal was to empower individuals to be agents of change, facilitating discussions among CSULB students, parents, community leaders, and the general public on the impact of incivility in public discourse. Due to COVID-19 restrictions on gathering, the CivilityLB team chose to engage these publics through a robust, fully online campaign on Instagram, Twitter, Zoom and its own website, CivilityLB.com. To emphasize its key message of seeing each other “From Another Point of View,” the team relied on partnerships with local organizations and owned, paid and shared media impressions.

“We were thrilled to be part of such an amazing initiative to improve civility as part of the Bateman Competition,” said the CSULB team. “The CivilityLB campaign was rooted in learning to respect and communicate with one another, and it impacted our team on a personal level. We learned just how far-reaching the impacts of incivility are on our families, friends and community members, and truly wanted to make a difference in their lives for the better. We know that our resources will continue to help the Cal State Long Beach and local community far into the future.”

Added Krista Coriaty, faculty adviser and lecturer at California State University, Long Beach’s Department of Journalism & Public Relations, “It was an honor to work with this group of students on their CivilityLB campaign – not only because of their drive, creativity and impressive results, but because each one of them brought heart and compassion to the project. They saw this campaign as a real opportunity to bring our Long Beach and campus communities together during a time when many of us need it most, pulling from personal experiences to establish relationships and develop impactful materials that will help improve civility for years to come.”

Behind the University of Nebraska–Lincoln’s campaign entitled “The Civility Effect” were five seniors who felt the most effective way to promote civility was to show the power of individual choices and their profound impact on the community and society as a whole. In this way, the team designed a campaign that aimed to cultivate an intrinsic value of civility within individuals, motivating them to interact with existing civic organizations, initiatives and resources. To inform and inspire individuals in the community, the team also organized two events — one in-person and one virtual — to not only demonstrate “The Civility Effect” in action but to equip individuals with the tools necessary to succeed.

“Finding the Neutral Ground: It’s More Than Meeting in the Middle” was primarily a virtual public relations campaign organized by Loyola University New Orleans. Leveraging the welcoming hospitality and culture New Orleans is known for, the campaign centered on the idea of respecting different ideas and creating a safe space for solution-driven conversations. To promote civility among college students and public relations professionals in the New Orleans area, the team formed a “Krewe du Civility” — a task of public relations professionals — and also hosted a virtual Open Mic Night to raise awareness around the team’s key messages. 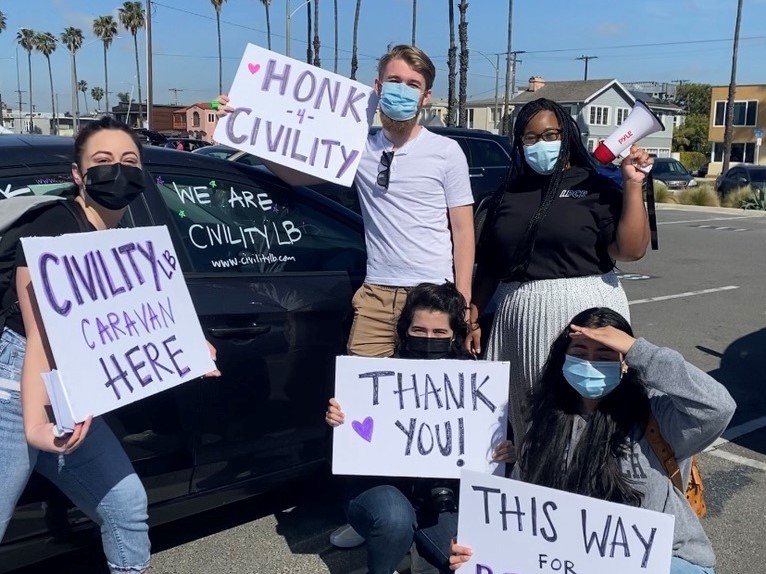