A Talk With Harold Burson, One of the Very First Fellows

PRSA Immediate Past Chair Anthony D’Angelo, APR, Fellow PRSA, also a past chair of the College of Fellows, interviewed Harold Burson at Burson Cohn & Wolfe’s New York offices just prior to the founder’s recent move to his hometown of Memphis, Tenn., where he still works three days a week.

The only living member of the College of Fellows’ 1989 inaugural class, the 98-year-old marvel projected the humility, graciousness and no-nonsense insights that led PR Week to describe him as “the century’s most influential PR figure.”  (Editor's note: Mr. Burson passed away on Jan. 10, 2020.)

As a correspondent for the American Forces Network, he covered the Nuremberg trials next to a young reporter named Walter Cronkite. After World War II, he teamed with Chicago advertising executive Bill Marsteller to launch their eponymous agency in 1953.

The term “integrated communications” didn’t exist, but that’s what the agency pioneered, calling it “total communications.” Mr. Burson became the first to see the opportunity for public relations to become a global industry at a time when the largest U.S. firm had about 100 people and serviced only domestic accounts.

On the way to Burson-Marsteller becoming the world’s largest PR agency, its CEO’s endeavors amounted to a highlight reel for the industry itself. He advised Johnson & Johnson during the Tylenol crisis, and Coca-Cola during the disastrous New Coke introduction in 1985. The company recovered to regain its market-share lead from Pepsi. “We got a hole in one after the ball hit a tree,” he once observed. Later, he advised his alma mater, Ole Miss, on its successful strategy to stop display of Confederate flags in its football stadium.

He joined the fledgling Public Relations Society of America at its inception in the late 1940s. “I got to know most of the top industry people by volunteering for various task forces,” he said. “If that had not happened, I would not have gotten on the track that I did.

“The character of the organization has [since] become more of a training and development field for younger people who come into the profession and I think its development programs are extremely good and extremely valuable,” he said.

A longtime supporter of PRSSA, Mr. Burson said, “I find these college students are very dedicated and committed, and we’ve hired a great number of them. I would say that our profession is a relationship profession; the more people you know, the more you can accomplish and the quicker you can accomplish it.”

In 1980, PRSA President Patrick Jackson, who helped form the College of Fellows, presented the Gold Anvil, the Society’s highest individual award, to Mr. Burson in recognition of his contributions to the profession.

In 1989, just after he stepped down as B-M’s CEO, he became a member of the College of Fellows’ first class, joining Jackson and other luminaries such as Betsy Plank, John Budd, Leone Baxter, Edward Bernays and Denny Griswold. And he’s still working.

“Congratulations to the College of Fellows,” Mr. Burson said with a smile, reflecting on the College’s 30th anniversary. “It has recognized the accomplishments of truly productive and intelligent people, and it encourages the maintenance of high standards and professionalism.” 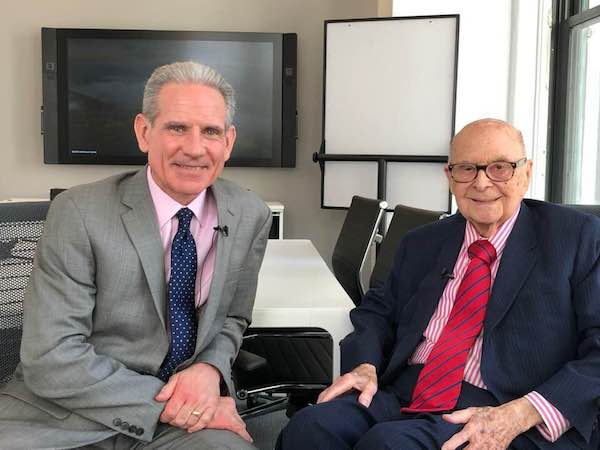