Steve Cody on the Strength of Humor

Favorite downtime activity: “Watching the Mets and Jets lose, year in and year out” 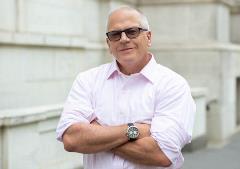 In 2018, you and your agency partner decided to split the business and continue as separate entities. What factors led to this decision?

As the communications landscape shifted, our views on the future of the profession and the best path forward for Peppercomm changed significantly. When it became clear that our visions no longer aligned, we decided it was in the best interests of our firm and our people for my former partner and I to move forward independently. While it was a difficult process, it has proven to be the right decision, and the new Peppercomm that I lead is greatly benefiting from its revitalized focus and direction.


What did the experience of splitting up the agency teach you about yourself?

I learned that I needed time to grieve (and recover from) the end of an entity that I’d always referred to as “my third child.” Once I did, I was able to fully embrace the thrill of running the “new” Peppercomm with three superb senior partners who have stood by me for decades.

In fact, the separation has provided me with a rare second chance to reinforce all of the positive experiences over a quarter century while learning from the negative ones and avoiding minefields I didn’t see the first time around.

I’ve also learned that it’s OK to make mistakes, own them and learn from them, which was not necessarily my MO prior to the split.

What’s your advice for others going through a business divorce?

Don’t panic. Things happen for a reason. And don’t look at a business divorce as an ending. Rather, view it as an opportunity to learn new things about yourself as a business executive and human being. Realize that it isn’t the end of your career but rather the dawning of a bright and exciting future.

Peppercomm is beginning its 25th year in business. What are some of the leadership lessons you’ve learned along the way?

Authenticity is key. I’ve also learned that possessing a servant’s mentality — taking accountability for one’s mistakes and providing transparency to all levels — is fundamental to success. Authoritative, management-by-fear tactics will not work in the long run. I’ve learned to listen to all points of view before making an important decision.

I’ve also learned to demonstrate to employees that I, too, am willing to roll up my sleeves and do my part to ensure the success of client relationships. In the past, I was far more focused on being the partner who represented Peppercomm to the world (in terms of generating thought leadership, joining key industry associations and taking the lead on networking). Now I split my time evenly between the external and internal, thanks to such a strong support system.

Finally, I’ve learned that employees want to have a voice in what happens. They want to know I am listening to their wants and needs  and that they can walk into my office at any time to discuss any matter. And most important, they want to know that I recognize the phenomenal work they do.

Why is humor so important for you — to the point where you’ve hired a chief comedy officer?

Humor is our secret weapon and a huge competitive advantage in business. The reasons why are both simple and complex.

When you make someone laugh, it stimulates the same endorphins in their brain as eating chocolate or falling in love. Make a prospect laugh at just the right point in a new-business presentation and it will make a difference in her final decision.

Performing stand-up comedy enhances one’s listening skills to a fine edge. It also better equips one to fill awkward silences in meetings or in tense situations.

Clayton Fletcher has been our chief comedy officer for more than a decade. He partners with me to explain to our employees, and to the numerous companies that have hired us to lead comedy workshops for their teams, how business executives can use the same techniques employed by comedians to enhance their interpersonal skills and overcome the fear of public speaking.