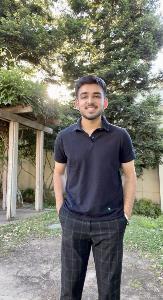 Sankalp Sharma, 2022-2023 Vice President of Chapter Development, is a junior at Sacramento State University in Sacramento, California. He is majoring in Public Relations and plans on minoring in marketing.

Sharma has been in PRSSA from his very first week of college and has been involved in several leadership roles for his Chapter. Out of his 4 semesters in college, he has served three of them on the Executive Board at Sac State, serving as Communications Coordinator, Vice President, and has recently been elected as the incoming President. Sharma got involved with PRSSA National by serving as a District Ambassador, and being a member of the PRoud Council. He is beyond excited for this new role and hopes to contribute to brighter future for PR students.

Outside of school, Sharma tries to stay to stay involved in his community, and has written two books that raise awareness about social injustices and inequalities. He has been donating all the revenue to charities in order to help out in whatever ways he can.

In his free time, Sharma loves being in nature, and catching up on his favorite sports.